I have previously written about column-switched chronographs, which is one of my favorite watch types in COLUMN SWITCH CHRONOGRAPHS

They dominated the chronographs for many years, as pocket chronographs and wrist-watches, in particular for military and study of operation time but also quite early, for measuring in the sports racing, olympics as well as some of they found their way to fame, helping man safely to and from the moon.

The column wheel is a fairly difficult mechanisme to build and to maintain, and  in the mid thirties, then demand for cheaper chronographs rose.

The two main factories for the new cam switched movement, had already been in the column wheel business for years. Hahn Landeron on a smaller scale, with movement like the caliber 39 and Valjoux and a much larger scale as you can read in the link about column switch chronographs.

Landeron should be mentioned first of all here for the calibers based on Landeron 48 which was a 13,75" movement, and the farther on many other calibers from Landeron, basically with most parts interchangable. I will not mention all, but just a few lik 148 -248 - 180 and 58, all 13,75", and the 14" not as commonly used movements in the series of 54 - 56 and others. They generally had two subdials and some of them calender. The three subdial versions had 3 as starting figure, such as 348 as cam-switched movement. A great place for easy access to details about the movements would be Rannfs Bidfun, in the link here shown for the Landeron movements. In total around 4 mio of those movement were build.

I shall here show a few cam-switched chronographs with the two subdial movement. I may have mixed Landeron and Valjoux, but it is not important as from the look of the watch, they are all much the same, and I would also describe the movement as much the same standard. All pictures copyright John Hannover 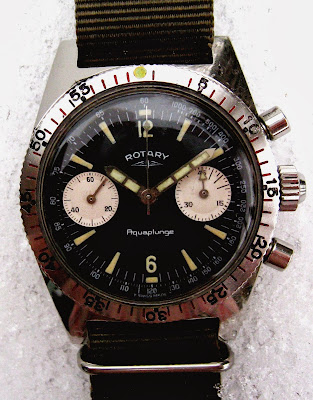 The first her is a member of the Aquastar family as used by divers in fact, although engaging the pushers under water is a very bad idea in my eyes. The Rotary brand was, and is rather big in UK 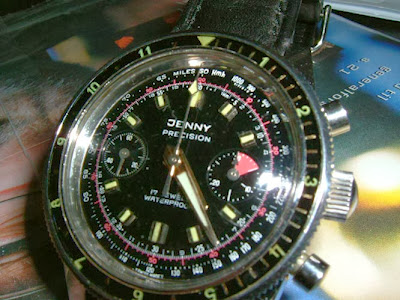 I love the Jenny watches from around 1960-1975. Jenny is the name of a famous swiss watch family, also for years manager of the Doxa factory. Jenny supplied watches to a great number of swiss watch factories, using their own name on the dial, but generally with the Jenny fish on the reverse 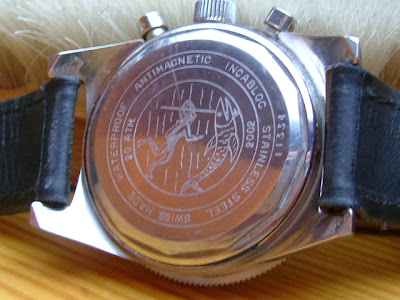 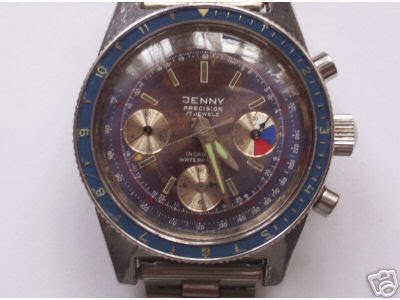 and the landeron 349 caliber 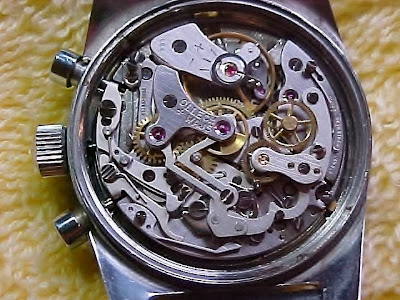 And a slightly better picture of an Olech & Wajs, again from Jenny actually 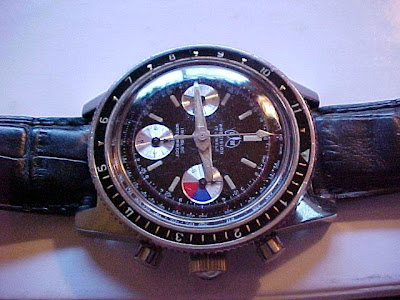 And as the last of the Landerons, a great Wittnauer professional 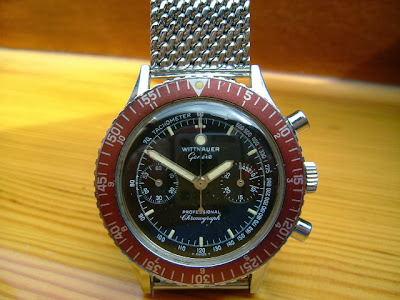 Valjoux made great success with their cam-switched 7733 and the date version 7734 - 14" movements and build in around the same quantity as the landeron movement. The machines for those movement were sold from Valjoux in Switzerland to Poljoux of Russia around 1975, as the quarts crises hit the swiss watch industry . The russians simplified the movement using f.inst. brass bearings rather than rubies and feather wires instead of bolts. This however does not have a very significant effect on the accuracy of the movement but must have on the durability. 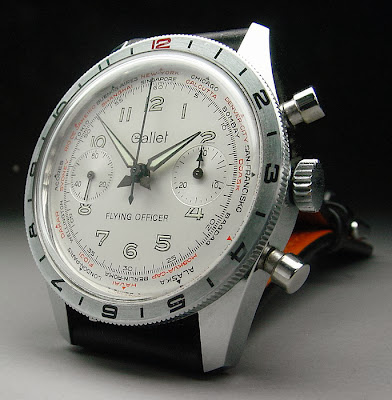 This is a beautiful and well  preserved Gallet Flying officer, as used by the american president and many officers during WW2. Unfortunately for me this is also a cam-switched version this time a rather beatiful venus 188 -. close familiy to valjoux 7733. I does exist with the EP column-wheel movement but I am settling for this one being cam-switched, but I am not so worried, I love the face of it. 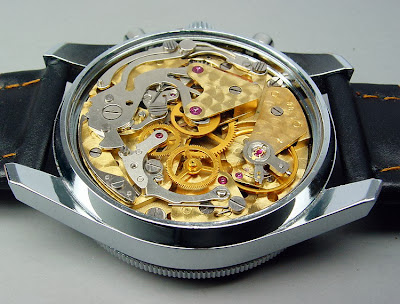 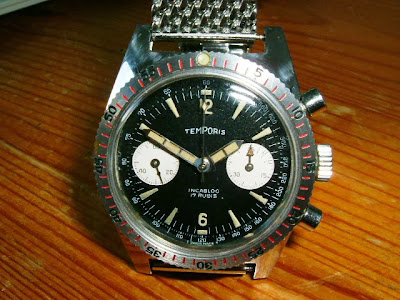 Here is a typical Valjoux 7734 with its date-window at the 6 o´clock position. 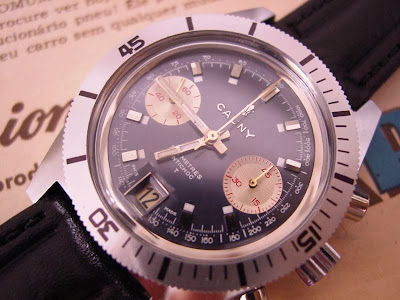 And a nice white faced O&W with Valjoux 7733 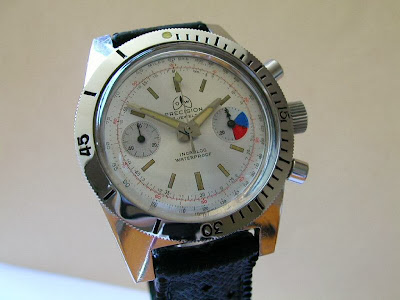 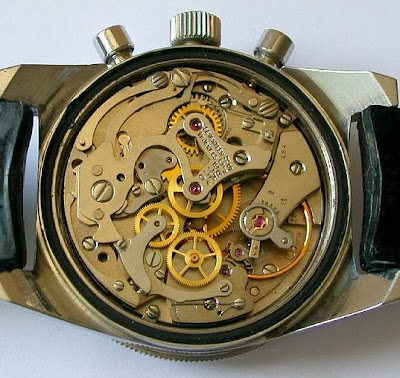 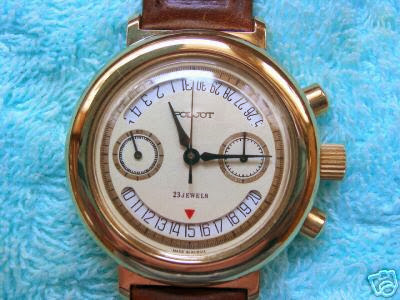 I will not spend so much time going into details with the cam-switched chronographs, they dominated very much in the period from 1940 to 1970 when gradually the swiss watch industry decided to return to earlier days fame for quality, and many factories resumed building in-house column-wheel chronographs

A few "newer" cam-swiched models should however be mentioned. The Omega 861/1861 which is used in the Omega Speedmaster and chronograph version of the Seamaster, took over from the column switched caliber 321 in around 1968. In fact, the caliber 321 was last build in 1960, where batches were packed in vacuum and oil and used for the speedmasters build in all the years from 1960 up to 1967 - references like 105.003 and 145.012 will typically have movement from the 1960 batches in their stomach.

The switch from caliber 321 to the cam-switched 861 (and later 1861) was made for two purposes. One to keep production price down and one to make it easier, quicker and cheaper to service. There is no doubt in my mind, that the 321 is a more beautiful movement BUT in all fairness, the newer cam-switched movements does an excellent job in both time keeping and when it comes to durability.

Another cam-switched movement which must be mentioned, is the work horse three subdial chronograph movement Valjoux 7750 -a 13,25" movement ( and its derived 7751-7753-7754-7760-7765 - calendar versions etc). This movement is contrary to all the previous mentioned, a full rotor automatic movement.

Is is no doubt the most commonly used 3 subdial movement used in affordably chronographs (price-level 1.000 -5.000 US $ just to give a rough idea) Some factories like IWC is refining the movements very much and that will demand a much higher price, others are using it as it comes from Valjoux. It is known for a kind of "wobbeling" feeling it can give on the arm, as the rotor rotates, but is is fairly easy to service (rather large number of parts - 111 should be the exact figure) and durable. 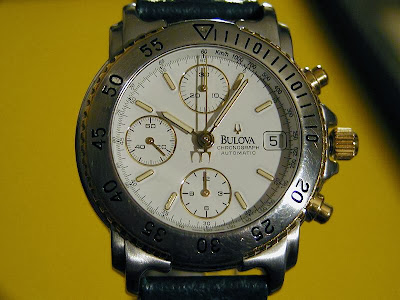 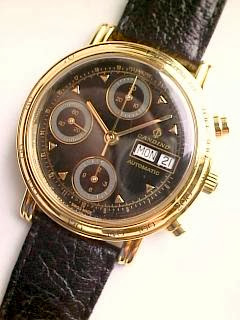 And the 7750 movement - covered byt the rotor 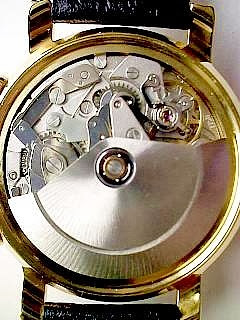 And here a version with date and moonphase, caliber 7768 - from Barrett 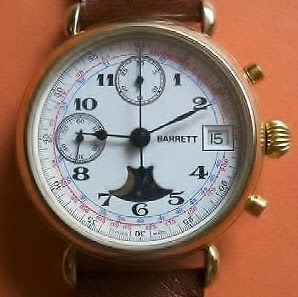 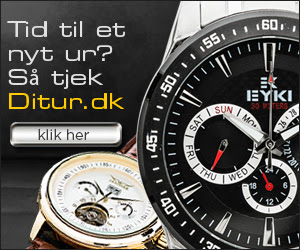