The tuning fork movement had a very brief part in the watch history. 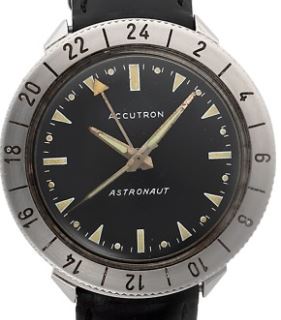 Development started at Bulova Watch Factory in 1952 and the invention is dedicated to Max Hetzel who joined the Bulova factory in Bern, Switzerland.  It was used in watches for the public from 1960

4 mio. Tuning-fork movement left the Bulova factory over a period, ending in 1977

It was an extremely accurate watch compared to all know manual watches in 1960.

For this reason, NASA quickly took Bulova tuning-fork watches in use as an integrated part of the computers for the space-program, and with participation in at least 46 missions leaving earth, they have earned a very important place in space-history.

Just as for the manual wrist watches, it was the quarts revolution which killed the tuning-fork, with Seiko in 1969 introducing the Astron as the world’s first mass produced quarts watch. In the beginning the Seiko Astron was a very expensive watch, but soon the quarts watch proved at least as accurate as the tuning-form, and much easier and cheaper to manufacture.

The idea of a tuning-fork movement is to have a tuning-fork set into vibration electronically by a battery. This form will swing at 300 to 720 times a second, depending of the watch brand.

The result is a high constant tone, which can be amplified a lot, if you place the watch on a wooden desk. The sound has given the watches their name after the sound of a humming bird, standing still, swinging its wings over a flower. Often those watches are just referred to as “hummers”.

Basically, the forks vibration is transferred via a very small indexing system into the rotations which drive the hands of the watch. This goes via an very small index wheel with over 300 teeth.
Obviously, with such small teeth, this wheel is a week part of the movement.
On the other hand, the very big number of teeth is also making the second hand of the watch go round completely smoothly, not a tick to be seen.

Bulova guaranteed an accuracy of max 2 seconds fast or slow per day, and often they would start out even much better than that – but this will not last for years, they will generally get slightly less precise.

Very few factories have been building tuning fork movements from the basis as in-house-movements.

The other, most frequently used Omegas, were the ETA/ESA based 9162 and 9164 – and they were all 300 hertz and was based on a Bulova license.

The Bulova licensed ETA/ESA 9162 and 9164 were produced with 300 and 360 Hertz and appeared in Certina, Eterna, IWC, Longines and all of the Omega tuning fork watches, apart from the above mentioned few with 1220 and 1250 Omega movements..

My own favourite is the 214 series, and out of that in particular the astronaut – with crown for setting the watch placed on the back of the watch together with the "battery-door" - Easy to change battery. 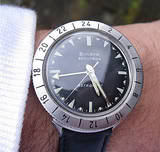 The Bulova tuning fork story is impressive in fact, both as invention, and for its use in space – here to a large degree stolen from the internet, but as shortened down from Bulova, I think I can be excused:

1952
Bulova begins developing Accutron, the first breakthrough in timekeeping technology in over 300 years. Accutron, the first fully electronic watch, promises to keep time to within 2 seconds a day.
1960
NASA asks Bulova to incorporate Accutron into its computers for the space program. Bulova timing mechanisms eventually become an integral part of 46 missions of the U.S. Space Program.
October 25, 1960
Accutron, the first watch to keep time through electronics, is introduced. It is the most spectacular breakthrough in timekeeping since the invention of the wristwatch. This revolutionary timekeeping concept of a watch without springs or escapement is operated by an electronically activated tuning fork. The Accutron watch goes on to become a presidential gift to world leaders and other dignitaries. President Johnson declares it the White House's official Gift of State.
1962
The Accutron Tuning-fork watch becomes the first wristwatch certified for use by railroad personnel.
1967
Accutron clocks are the only clocks aboard Air Force One.
1969
An Accutron watch movement is part of the equipment placed on the moon by Apollo 11 astronauts, the first men on the moon. A Bulova timer is placed in the moon's  to control the transmissions of vital data through the years.
1973
Three specially designed Accutron portable alarm clocks are placed on board NASA's Skylab, the world's first space laboratory, launched from . Also this year, Bulova wins the world's first design competition for solid-state digital watches at the Prix de la Ville de Genève watch-styling competition, the world's most prestigious international watch-styling competition. Bulova also wins two of the three honorable mentions awarded at the competition.